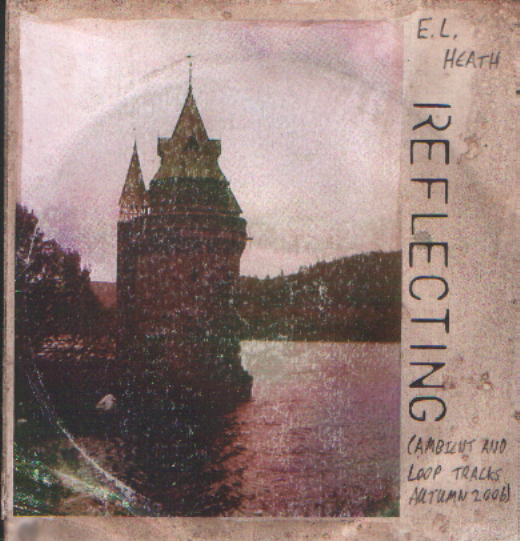 'Reflecting...' is the ghostly Ondes Martenot sounds of Shorpshire's EL Heath. EL Heath finds beauty all around him; in the country side, around his home, in childhood memories, in early morning light and in dreams

As an honourary member of Epic45 and as part of madcap Welsh Krautrockers Strap The Button, it's a wonder how Mr. Heath finds time to record such captivating sounds.

Based around the unique howl of the Martenot (one of the scarcest instruments on the planet) and his choice of recording equipment - namely a 20 year old tape recorder, 'Reflecting' was once described as Basinksi's decomposing symphonies laced with the expansive nature of Vangelis' 'Bladerunner' score.

Also included is a series of photographs taken by EL Heath, which inspired the sounds you can hear on the record.

Reviewer: Micky1967 - favoritefavoritefavoritefavoritefavorite - May 14, 2009
Subject: A must for space cadets everywhere.
Phantom Channel has put out some great stuff in the year and a bit since its inception, and all the downloads are free too. But for me, this short and unassuming release by Shropshire’s EL Heath (Eric to his mum) is the finest yet. Reflecting (Ambient and Loop Tracks, Autumn 2006) [Reprise] – let’s just call it Reflecting – first saw the light of day as an ultra-limited CDR a couple of years ago. Thankfully it’s now available to a wider audience.

As the title suggests, the five tracks are based on tape loops that provide a rhythmic backdrop to some simple melodies. The piano-based “Shadows on the Carpet” is redolent of William Basinski’s shorter loop experiments, such as the fourteen part Melancholia. “Ambiance d’Organe de Corde” is, as its name implies, a short organ piece.

The real treats are the final three tracks which introduce the eerie sound of the ondes Martenot, an early electronic instrument related to the theremin. On “Macau”, a looped acoustic guitar figure and muffled voice set the scene for half of the track’s two minutes before the mournful cry of the ondes Martenot comes in. It’s a startling moment, but quite stunning. “Dragons Chasing Their Tails” is even better. The cosmic wail is looped and overdubbed and buried in a hiss of distortion. It sounds like a dust-caked wax cylinder recording of an Edwardian alien encounter. Finally, “Epick” outdoes the lot. There’s a half-buried bubbling synth loop like Rubycon-era Tangerine Dream beamed in from several light years away. Over this, the ondes Martenot sobs and cries, a haunted remnant from a lost civilization. It’s deeply moving – a superb piece.

And it’s available for free. I can’t recommend this release too highly. It’s beautiful, concise and warm. A must for space cadets everywhere.